Ludwig (Ludovico) Seitz’s wondrous Vatican Angel is not a product of the Renaissance, yet it channels so much of the Renaissance as well as being surrounded by it in the Galleria Dei Candelabri in the Vatican.

Some paintings are so iconic that they remain emblazoned in our minds, reappearing often as lovely dreams. The wondrous painting of the Angel and Farmer by Ludovico Seitz (Ludwig Seitz, 1844 - 1908) in the Vatican's Galleria dei Candelabri (Gallery of the Candelabras), is one of these.

It depicts, in blazing, living color, the metaphor of Divine Grace on Human Works, as exemplified by the Angel showing the Sun to an old man toiling away at his labors.

The Angel’s accoutrements (laurel wreath, staff, flowing robe) and her immediate surround (the verdant garden) are depicted in dazzling colors, indeed all the colors of the visible spectrum (ROYGBIV), whereas the laborer and the rest of the painting are muted in sepia or a drab gray.

The Angel is pointing out that without sunlight, the laborer`s works are in vain. Just as sunlight brings about the material works of man, Grace allows the works of the spirit to shine.
Seitz’s genius Iies not only in painting those dazzling colors, but also for the “incredible lightness of being”’he invests in the Angel, floating, buoyant, androgynous, ethereal and yet tangible, just magnificent.

Behind the Angel is the Latin motto: 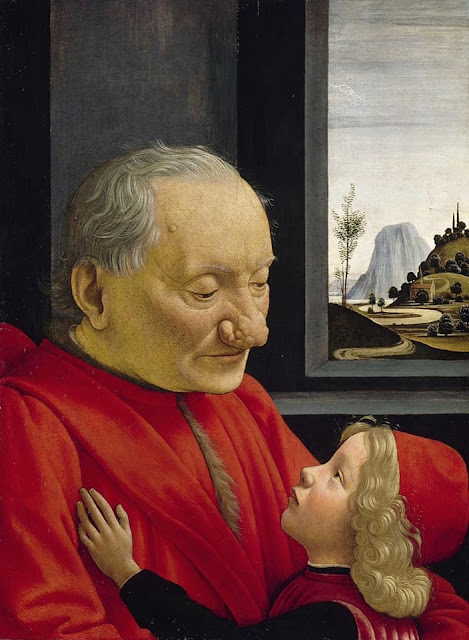 To be sure, many Rinascimento paintings and sculptures were depictions on religious or mythologies themes, but the spirit of the Renaissance hewed toward inquiry and realism even in these works.

In Domenico Ghirlandaio’s iconic and enduring  portrait of the Elderly Man and Child, we see an artist who has transcended painting metaphors and inferences, symbols and tangents, to an artist who paints reality; reality admixed with a courageous intimacy.
Ghirlandaio depicts the  face of the Elderly man with all its faults- “warts and all.”
This realism is such that I employ this painting to teach the residents about oculocutaneous rosacea of the eyelids and cheeks, and the nasal carbuncular changes (called rhinophyma), conditions which are depicted here with an anatomicopathological accuracy that is almost photographic in detail.
Nothing is sugarcoated.
Detail and truth.

Ghirlandaio presents the portrait in a naturalistic and sympathetic fashion, at variance with the physiognomic theory of the era, which maintained a connection between external appearances and internal truths.
Whereas the pre-Renaissance view of the old man might have been to disparage his “old age-ness”, Ghirlandaio elevates the rendering of his wizened face and deformed nose to a tender moment where the old man and the child share a common bond - perhaps this is a grandfather and his grandson.
Given the affection the two have for one another, we can assume that they are related, and likely at the level of a grandfather and grandchild.

“Rather than implying a defect of character, An Old Man and his Grandson” invites appreciation of the man's virtuousness.
“The painting depicts a moment of intimacy between the elderly man and the child, underscored by the placement of the child's hand on the old man's chest, and the old man's gentle expression. This show of affection endows the picture with emotional qualities beyond those expected from a traditional dynastic portrait.”

In fact the Italian name for this painting is very specific: “Ritratto di un vecchio e nipote”
“A painting of an old man and grandson (or nephew)” (The term “nipote” can refer to either a grandchild or a nephew).

Of this great humanistic masterpiece, the great Harvard art historian Bernard Berenson stated that “there  is no more human picture in the entire range of Quattrocento painting, whether in or out of Italy."