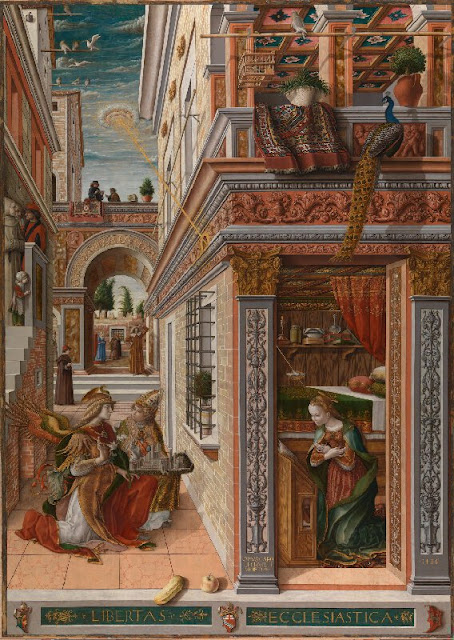 Carlo Crivelli (1430 - 1495) was an iconoclastic genius who, though he lived and worked in Venezia and Le Marche near Ancona at a time when the naturalistic trends of Firenze held sway, continued to work in the conservative International Gothic Style of Northern Europe.
His settings, as we see here in the finely detailed Annunciation with Santo Emidio, are jewel-like and full of elaborate allegorical detail.
Here there are two narratives taking place simultaneously in which allusions abound.
To me, the extraordinary, powerful, almost vertiginous linear perspective goes beyond being a mere line of sight to the vanishing point in the center of the painting.
Crivelli favored verdant backgrounds, his works enriched by a characteristic use of fruits (do you see the cucumber? 🙂 ), and flowers as decorative motifs, often depicted in pendant festoons, which channel the Paduan studio of Francesco Squarcione, where he studied and worked.

The painting pays homage to the town of Ascoli, to which, in 1482, Pope Sixtus IV granted a degree of self-government. It is part of an altarpiece for the church of Santa Annunziata in Ascoli to celebrate the event. The coats of arms are those of the Pope (left) and the local bishop, Prospero Caffarelli (right). News of Ascoli's new status reached the town on the feast of the Annunciation, 25 March, which then became a feast day when the town celebrated its liberty. 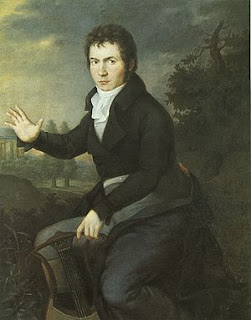 Extraordinary, and all from such a simple tune.
Then again, isn’t one aspect of genius its elegant simplicity combined with awesome power?

Take the four and a half minutes to listen to the Act I Quartet from Fidelio, and let this sublime music and its meaning wash over you.

Yes, it is about the power of love.

Posted by Vincent deLuise M.D. at 8:45 PM No comments:

NEVER FINISHED, YET PERFECT: Leonardo’s Saint Jerome in the Desert

Submitted for your wonder and fascination is Leonardo’s never finished, iconic and brilliantly conceived painting of St Jerome in the Desert.

So many of Leonardo’s ideas - in engineering, science, medicine and art- never were completed. He could never say “done,” even for La Gioconda (Mona Lisa), and yet there is always a perfection of form and power of meaning even in his drafts and uncompleted works.

St Jerome in the Desert, one of only seven Leonardo’s 20 or so extant works that are indisputably only in His hand, will be coming to the Met from the Vatican later this year, as a one-painting show to honor the 500th anniversary of the death of the Master.

The painting shows St. Jerome at prayer at the end of his life, a hermit in the wilderness, alone save for his lion companion—a common Renaissance subject. And yet it stands alone in its deeply moving, intimate depiction of the penitent saint in a moment of private reverie. As Jerome stares up at his crucifix, his spiritual struggle is plain to see, even though many passages of work show little more than the ground preparation on the wood panel, with hastily sketched outlines.
And we literally have Leonardo’s hand in this masterpiece- his fingerprints can be found in the upper left of the painting it as he rubbed and smoothed his oils and tempera on the walnut.

Posted by Vincent deLuise M.D. at 6:47 PM No comments: