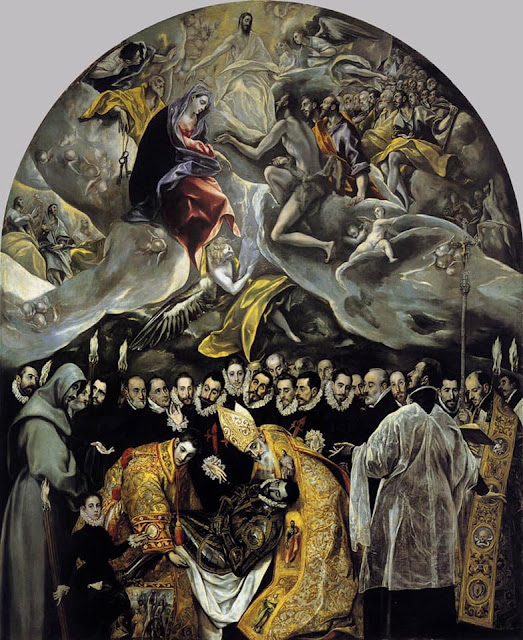 Style or Substance ?
The Fallacy of the El Greco Fallacy

In your art history courses, you came upon with wonder and amazement the remarkable works of the visionary 16th century master, Domenikos Theotokopoulos (El Greco), and noticed his highly elongated figures.
Was this a result of El Greco possibly having astigmatism?
Or was it simply his unique and quite modern version of Mannerism?
The “logical” response to explain the elongations would be that it was his style, of course, and not astigmatism.
Why?
Well, you respond immediately with the “self-correcting” algorithm, by which someone with astigmatism, even if they perceive a circle as an oval in their mind’s eye, will still depict it as a circle, thus self-correcting it. Any perceptual elongation that El Greco might have experienced as a result of astigmatism would have caused not only his subjects to be elongated but also his canvas. Hence, it should have been unnecessary for him to elongate his paintings to match his perception.
And you correctly propose as examples the masterpiece of St Jerome at the Frick Collection or a similar version at the Met, because how could Jerome’s face be depicted with a vertical elongation while at the same time his fingers are horizontally elongated. Astigmatism elongated in one meridian, not in two meridians orthogonal to each other.
Then you posit the masterpiece that is “The Burial of Count Orgaz” in Toledo Spain, as your ace in the hole.
Here, El Greco paints the human figures at the bottom more or less naturally, but exaggerates Mary and Jesus and the angels in the Empyrean above.
It would be optically impossible (i.e. physically impossible) for someone with astigmatism to see part of their visual field normally and another part in an elongated way.
So all is well. Right?
Style and not a medical condition.
Style and not Substance.
Ah, but now 2014 comes around and you find this fascinating article, entitled “The Fallacy of the El Greco Fallacy”
https://www.ncbi.nlm.nih.gov/pubmed/24577418/) see comments for abstract.
So now what do you think? 🙂

ANCIENT MODERNITY: The Extraordinary Realism of the Fayum Portraits 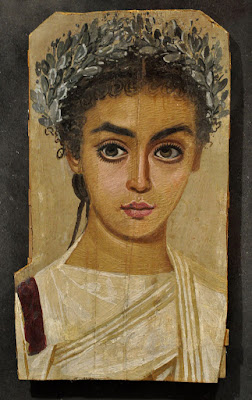 ANCIENT MODERNITY:
The Extraordinary Realism of the Fayum Portraits

Realism. That is the genre we usually associate with Corot and Courbet and Millet in the 19th century. But go back 19 centuries (!), yes 19 centuries, and you will find among  the first examples in history of Realism, in the extraordinary depictions of Roman Egyptians, the Fayum portraits, crafted in the first century CE.
These remarkably well-preserved paintings have survived for almost two millennia in the dry heat of the Fayum, a region southwest of Cairo.

The portraits, about a thousand of which have been discovered, are extraordinary, and extraordinarily real. It is as if we are reaching back via a time machine almost two millennia and the subjects depicted in them are right in our living rooms saying hello. Shortly after these portraits and after Pompeii in central Italy (79 CE), the technique died away,  until Tiziano (Titian) and Rembrandt revived it in the 17th century.
The portraits portray a people who accepted Roman rule, Greek culture and Egyptian religion. ''What form could better exemplify this complex ethnicity than the combination of Greco-Roman clothings, hairstyles and jewelry, with the quintessentially Egyptian funerary practice of mummification?'' asked Roger S. Bagnall, a professor of classics and history at Columbia University.

The two techniques used in these portraits were brought to Egypt by the Greeks: tempera, in which pigments are mixed with egg white; and encaustic, in which pigments are mixed with beeswax, presaging oil painting.The wood used for the portraits, lime and oak, was imported from Greece.
The portraits had a religious and funerary function even though they look just as they should look if the sitter had asked for their portrait to be painted.

Whenever we self-servingly think that we are more advanced than the ancients, that we are more “civilized” than they, that we are in some myopically egosyntonic way superior to them, we need only to look at these astonishing portraits and realize that very little is new under the sun.